Home Dogs How To Hiker Finds An Injured Dog On Her Way Down The Mountain And...

Reaching the peak of an 11,106-foot mountain is a very challenging hike to embark on. However, in the case of Tia Vargas, a 40-year-old single mom of three who lives in Idaho Falls, Idaho, the journey of descending Mt. Table Rock was far more difficult when she came across a surprising baggage. She was set to carry a 55-pound injured pup on her back on her way down.

She saw two hikers attending to an injured dog as she was on her way back to the foot of the mountain. She was told that they were climbing up and that they tried finding the dog’s owner but to no avail. She knew then by the moment she must take in charge.

The hikers found out the dog’s name written on his collar tag, “Boomer.” He is an English Spring Spaniel who had survived a 100 ft. accidental drop while hiking with his owner. He was very lucky but got seriously injured and needed to be treated.

Imagine her father’s surprise when he saw her daughter coming back with a heavy dog on her back. Since he cannot reach the summit due to too much exhaustion, he stayed behind and waited for her to descend. He told her daughter that it would be very tough for her to carry the dog all the way down. 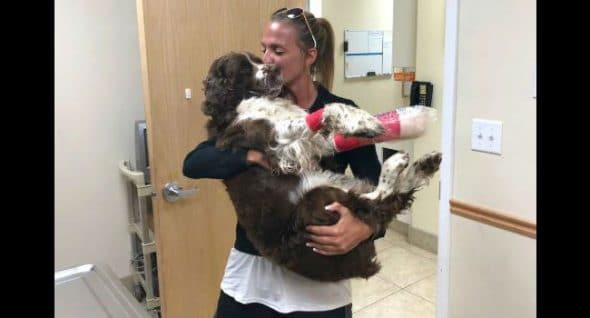 Tia Vargas was determined to bring the dog though, as he was badly hurt and he needed her help. They managed to trail six miles down while snow and debris were storming their way. They even got lost and caught in the rain.

The three were able to replenish their energy by sharing all they had; cheese and crackers and ham sandwich. There was even a moment when the thought of leaving the dog behind crossed her mind.

After a long and grueling journey, they had reached their destination. There they met the dog’s owner who was trying so hard to find him. Boomer who was very hungry and in a lot of pain got treated right away.

After 15 years of not having a dog, Tia got to keep Boomer for good. The owner gave the dog to her instead of selling him as a hunting dog as he planned before. He knew that with what she did for Boomer, no one deserves Boomer more than her.

Thanks, Life with Dogs, for sharing with us this story.